Well hello! If you’re reading this, you must have survived the holiday and the frenzy in the stores! This week, try a taste of Something Like a Lady, Regency in progress with Kim Bowman.

Annabella held the rosebud to her face and sniffed. The sweet perfume filled her nostrils until she found herself giddy with taking so many deep breaths. Her stomach rumbled and she splayed her fingers across her abdomen until the grinding pain of her hunger passed. Of all her discomforts, she decided the hunger was the worst. But at least she had no horrid rules to follow. None of her mother’s harping and pushing about marriage.

No one to talk to. She sighed.

But now that she had the attention of a maid willing to help her, most of her discomforts were about to vanish. No more horrid lemons, food prepared by the competent kitchen staff. Would Abby serve her meals? Or would that cause her to be missed from other duties? Oh, what did it matter? She was about to be delivered a meal, the first true meal since she’d packed Juliet off to London. What a brilliant stroke of good fortune that the maid had been sent to clean the cottage. Annabella hadn’t known anyone bothered with the decrepit building any more. Apparently it was still cleaned every so often after all.

She glanced up the narrow track. When would Abby return with her food? And some of her own clothing? To eat again and not have to fight the mice for the last crumb of stale bread, surely that would be as close to heaven as she was likely to get before she died.

She lifted the rose again and inhaled deeply. Nearby, a bird sang. Annabella tried to imitate its call but she’d never learned to whistle—no matter how many times Juliet had tried to teach her. So she started humming. The bird trilled a reply and Annabella opened her mouth and sang an upward scale of “ah-ah-ah’s.”

the yard, but stopped short. That seemed too irreverent. With a sigh, she hummed a bit from a Beethoven piece. Her feet picked their way over the rocks as she hopped and kicked.

Soon she would have food…and her own dresses. She closed her eyes and twirled, imagining the handsomest prince as her dancing partner. Juliet might think it a child’s tale to dream of true love, but Annabella didn’t think that at—

Strong arms caught her in mid-spin and a hand settled at her waist. Annabella’s eyes flew open. She opened her mouth to scream but the dashing stranger grinned and whirled her around then released her.

Annabella stumbled and then scrambled backward, intent on putting distance between her and the stranger.

“What are you doing?” she demanded, placing her hands on her hips. And why must her heart race so?

The stranger had the daring to laugh outright. He aimed a courtly bow in her direction. “I beg your pardon. I saw a lady dancing and in need of a partner and thought to oblige  with my services.”

Find all my books on Amazon and Barnes & Noble.

I’ve been very fortunate my entire life to have the love of my family. Though it has changed over the years – grown and reduced and grown again – I am grateful to always find myself surrounded by family I love, knowing that they also love me. What about you all? What are you most thankful for?

I was going to delight you with a bit more of my contemporary work in progress, but since my full length Regency romance The Toymaker  was JUST RELEASED, I thought I’d give just one more little snipped! Only 99 cents!     Amazon  <><><><> Barnes & Noble

Ivy stared at Phillip’s stricken face. Of course, she could prevaricate, or perhaps delay answering so as to spare him, but she could tell from the haunted expression in his eyes that he already knew.

Even from across the room, Jenny’s happiness was a beacon of light. She held her wooden horse out, and Harriet Williams stroked the back, a sweet smile etched into her wrinkled face.

“I was coming to tell you an extra child had been sent from Meadowview — they hadn’t expected Jenny to be well enough, but at the last minute the nurse decided she should come along.” Ivy shrugged. In the shadow of Phillip calling her magical, the truth was rather dull. “I simply feared you would run out of gifts.”

A weak smile teased his lips upward. “This is the last time I’ll be caught short, that much I can promise. Thank you for your rescue in my moment of need.”

Ivy looked down to hide her smile. He’d likely bring scores extra to every future occasion.

“It seemed the least I could do, considering your daring rescues of me of late.” Oh, how she wished she had daring of her own… to reach out and take Phillip by the hand, to acknowledge her affection for him in front of her guests. She started to raise her hand, hesitated, moved it again. Just lift it a bit more.

“What will become of her? Of them?” The sadness woven through his words tugged at Ivy’s heart.

Oh, how she longed to lie again, but this was one truth she couldn’t deny. “Howard might do well. A family needing a strong son might take him in. Their brother… If a childless couple seeks a baby, he might do well.”

Ivy turned to meet his gaze, to be certain he understood her answer. “She’s very small and fragile. Miss Hortense tells me she’s frequently taken with a fever.” Why did her voice have to shake so? She swallowed but couldn’t force the breath into her lungs. “Without a great deal of charity, she won’t last the winter.”

In honor of Veteran’s Day tomorrow, a little something from my work in progress, The 13 of Hearts:

Rabbit slid the key into the padlock and turned it, then freed the hardened steel loop from the latch and pushed the pale blue door to his storage unit upward. He hadn’t been there in more than two years, and he had no idea where he’d stacked the box containing his family photos, but he sure hoped it was somewhere near the front of the locker. A line of dead 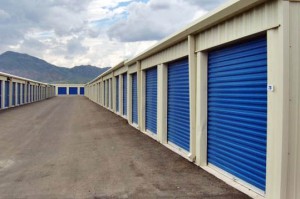 insects about an inch wide marked the perimeter and Rabbit stepped over them, then turned around and used his foot to brush them off the low step to the ground beneath.

The crunch of gravel beneath tires startled Rabbit and he fumbled the lock in his hand, cursing when it slipped from his fingers and bounced off his foot. He hadn’t realized anyone else was visiting the storage facility—not that he had any kind of exclusivity clause, but he’d thought he was alone save for the pimply faced kid in the office. The mid-sized silver sedan raised a cloud of dust as it passed from the north side of the parking lot. Tension squeezed his chest and Rabbit held his breath. Hugging the doorway, he stepped further outside and flicked his glance to the direction the car had come from. No other vehicles else approached. He whipped his head to the left, scanning along the gray block walls that made up his row in the storage facility as he did. No movement.

As he eased out a breath, the vise of anxiety loosened its grip around his chest. Okay, no more surprises.

Find me on Amazon and Barnes and Noble! Return to Sweet Saturday Samples.

Hope you’re enjoying November so far. Not much longer until Christmas! 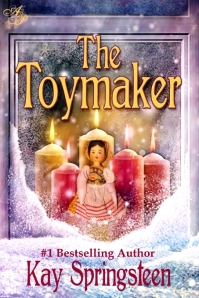 She couldn’t have said what she expected to find in the toy room — a version of her childhood nursery perhaps, or maybe a windowless storage room, shelves loaded with toys.

As soon as Phillip pushed open the door, Ivy knew she was about to enter an enchanted realm. Red and blue and green points of light frolicked across a plank floor as though they were alive. It took only a quick glance to find the source of the colorful delights. A row of stained glass windows collected sunlight from outside and splashed it into the room.

Toys quite forgotten, Ivy slipped her hand from Phillip’s arm and stepped into the dancing lights. She did a slow pirouette, watching them change around her as she did. Then she walked slowly toward the three peaked gothic-style windows. How old were the panes? The glass had run and thickened in places but the brilliant color remained strong.

The center window, the largest, showed the Holy Virgin holding the Christ child in a loving maternal embrace. Her cheek rested on his forehead, her eyes were closed, her face a study in pure peaceful bliss. Behind her, with one hand on her shoulder, Joseph, the earthly father of the Savior. She swallowed back the emotion choking her throat. The detail in the scene entranced her.

Above, fitted in the point of the window, a trio of angels watched over the family, while heavenly light spilled from around them to fall onto the stable below. The window to the left showed a procession of shepherds walking in from the fields, some with sheep on their shoulders, others with sheep at their feet. The window on the right showed three men of obvious means on a mission.

“The magi,” whispered Ivy. Again, the detail in the picture made up of bits and pieces of colored glass stole her breath.

“Gaspar, Melchior, and Balthasar,” murmured Phillip, moving to stand next to her. Ivy had nearly forgotten he was in the room.

Her gaze drifted to the wall. Some of the stone had been chiseled away and shaped, likely to fit the stained glass panes in place — quite recently, too. The builder’s mortar set around the windows was freshly set, with no stains or signs of chipping. 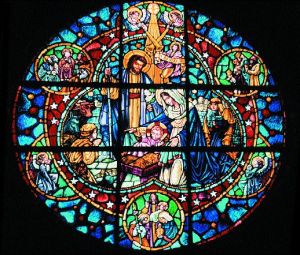 “These are old, but they didn’t start out here.” She placed one hand on the stone wall beneath the center window, enjoying the coolness beneath her palm. “Who did this? Who set them into the wall?”

Ivy turned to regard the tall man next to her. For once she didn’t catch him studying her. Instead, he contemplated the light cavorting across the floor. What was giving it the appearance of moving like that?

“These were a gift, a… legacy from the craftsman who taught me. I brought them with me when I came here.” He lifted his gaze and pinned her with it.

“And… the Duke of Greenbriar allowed this?”

Phillip’s lips twitched and then pulled up into a warm smile. “He said not one word to me on the matter.”